Design
What is the Difference Between Post & Beam and Timber Frame Homes?
By Linwood Homes
March 18, 2021 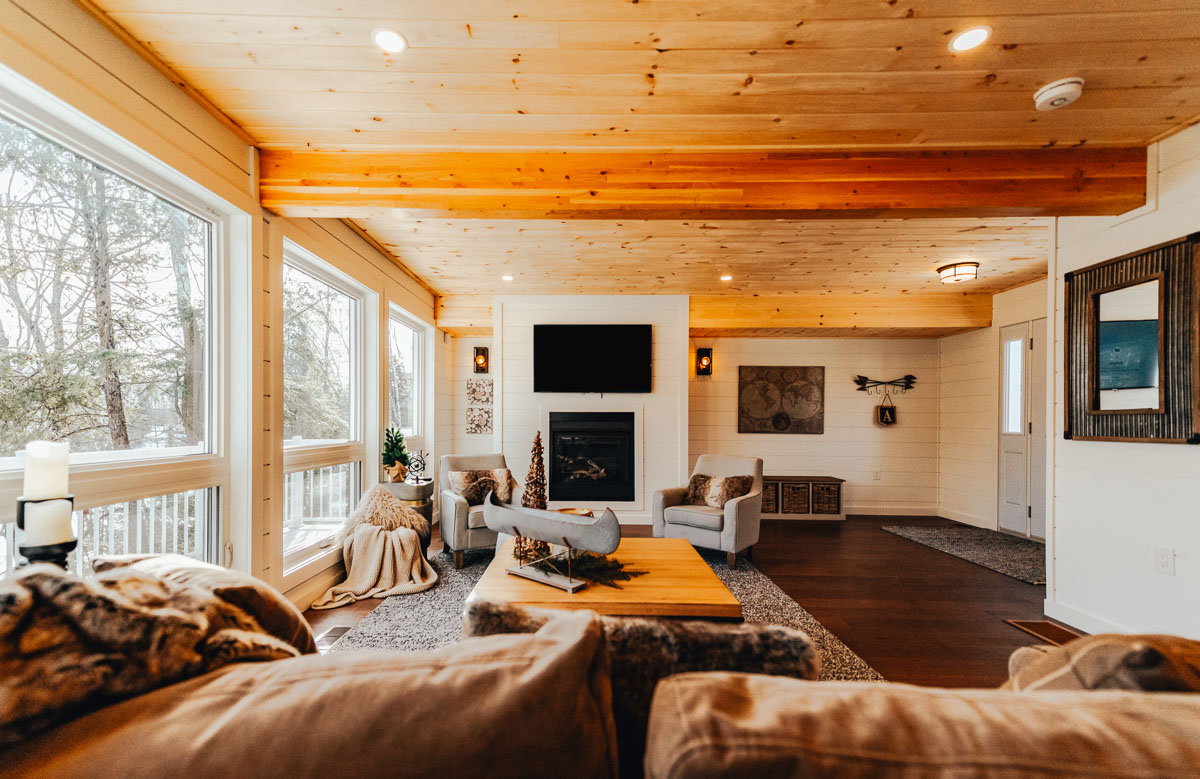 Post & beam and timber frame homes both use a classic method of building to create incredibly beautiful end results. Soaring ceilings, open concept design, warm exposed wood beams and a rustic atmosphere are all characteristics of these homes.

In general, it is often thought that the two types of design are different when really, they are both adaptations of the same thing. Let’s explore more about post & beam and timber frame homes to get a better understanding of how they originated and how they are used in modern construction. 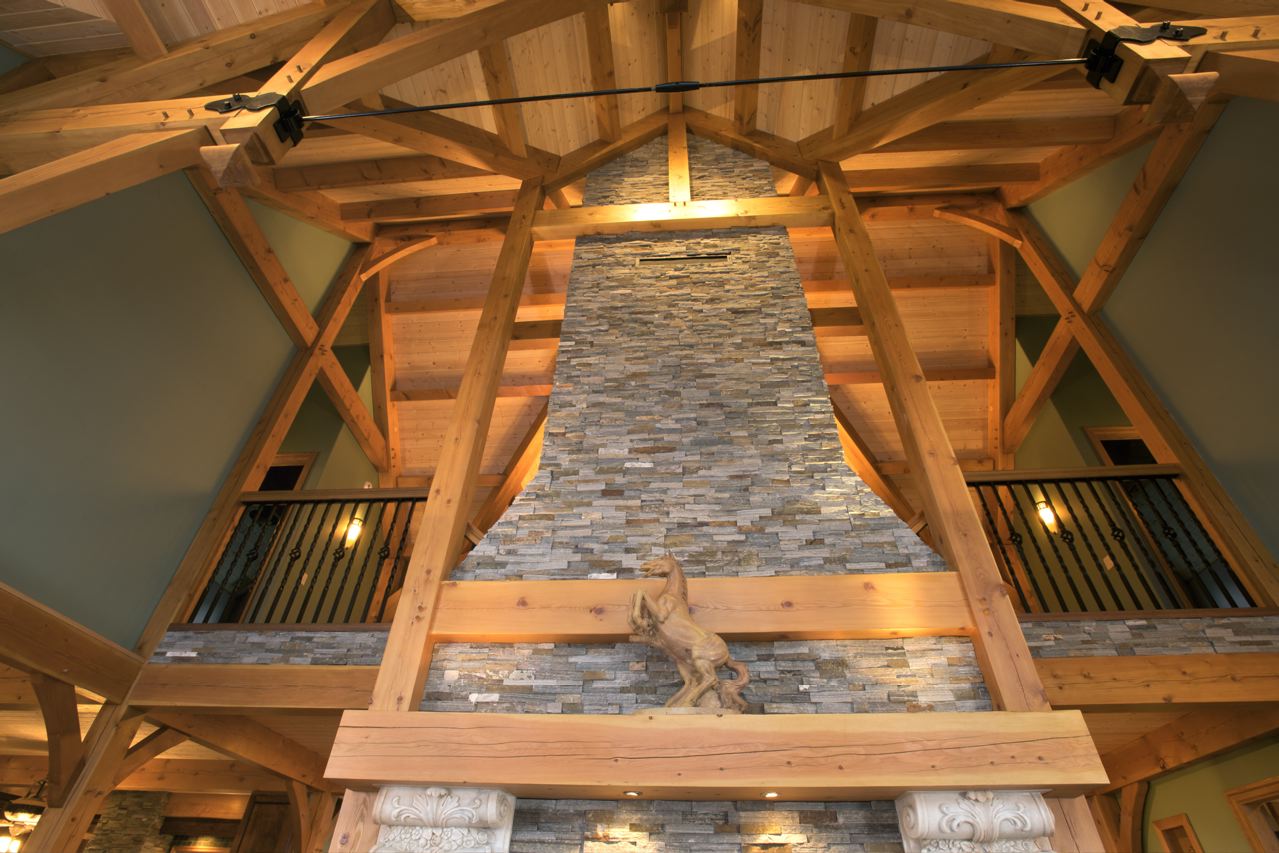 A History of Timber Frame Construction

Different types of construction evolved over time in order to accommodate for various situational factors such as access to materials as well as skilled labour. Everything from brick, stone, cement and wood have been used to build homes. Timber frame became popular because of its efficiency in using fewer materials. It is a very old method of building. Timber frame design does not need as much lumber as traditional stick-built homes. This made it popular worldwide and it was useful in times where there were shortages of material. Simple timber frame styles were used to build barns and churches, even entire villages. Shakespeare’s Globe Theatre is an example of a 16th Century timber frame design.

Traditionally in simple timber frame styles, the four sides of the structure are fully constructed on the ground, and then they are raised, to form vertical walls. Timber frame structures are pre-cut in order to fit together using only the wood itself once the walls are raised. They are secured in place by wooden pegs which creates a seamless overall look. This style of building was very economical, all it required was lumber to create the skeleton structure of the home. The structure supports itself and is very stable. 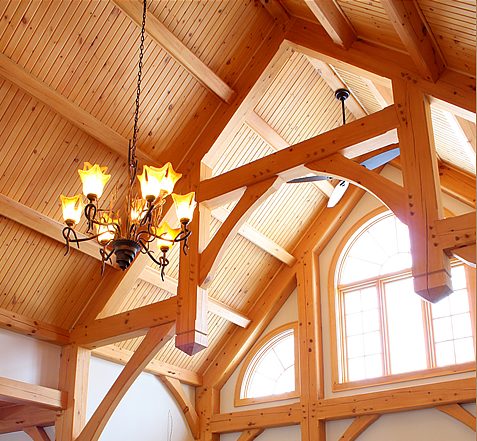 Nowadays, there are more complex and elaborate variations of classic timber frame homes. Large beams are used with wooden framing as an aesthetic feature. One thing to note is that the beams in timber frames are always made of solid wood. It makes for a very earthy yet awe-inspiring interior. Timber frame homes are quite exclusive, luxury structures now because large, solid wood timbers are expensive to obtain. Although they are beautiful, the high prices led to an adaptation of the timber frame style which we call post & beam design. 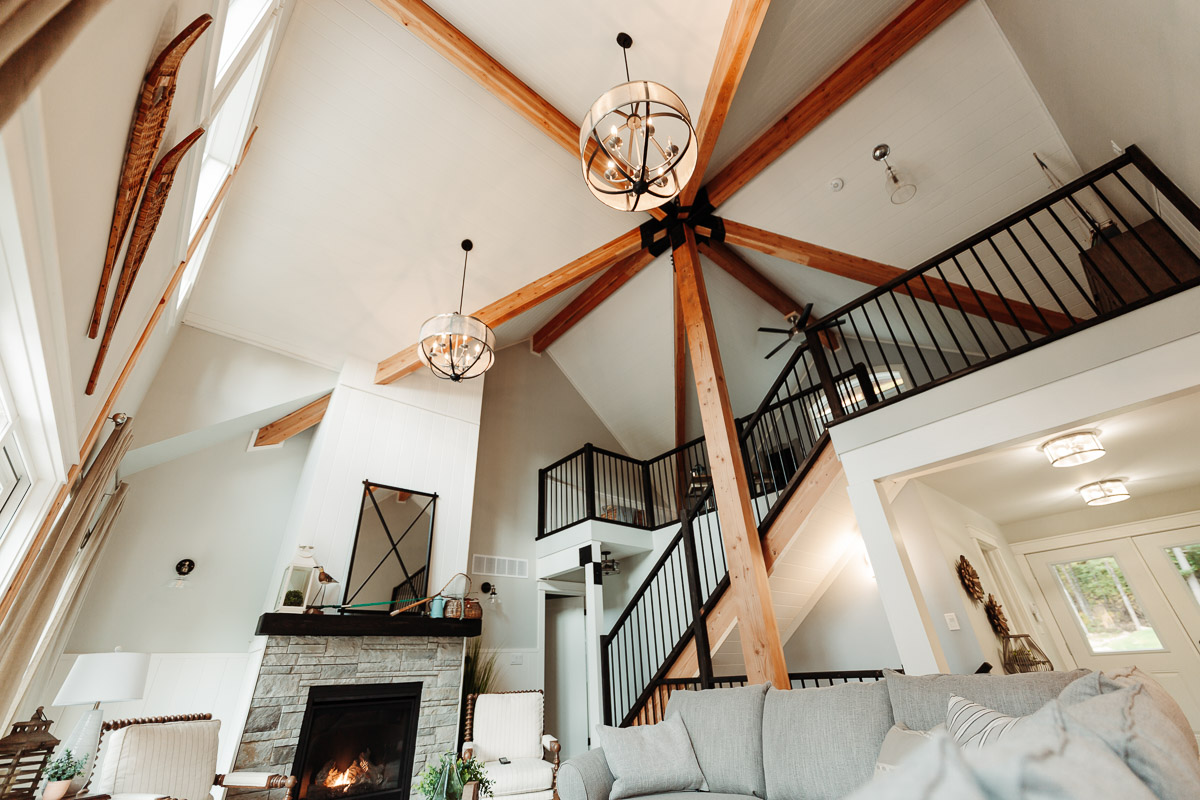 Post & beam design takes all of the same elements seen in timber frame homes. The interiors are spacious with high vaulted ceilings, open concept floor plans and exposed wood posts and beams throughout.

The main key difference between the two is that post & beam homes do not often use solid wood timbers and instead use glu-lam beams. Glu-lams are pre-engineered beams that use more than one piece of lumber, fused together in order to create the appearance of a single, large, solid wood beam. This makes post & beam design more affordable than traditional timber frame homes because massive solid wood timbers are no longer needed to create the same overall look.

One other key design element that differentiates post & beam homes from timber frames, is that post & beams most often feature large, visible metal hangers which hold the supportive posts and beams in position. These also act to stabilize the structure. Traditional timber frame models use wooden pegs to achieve the same outcome, but there is a cross-over between the two styles, and it is possible to see metal hangers on timber frames as well. 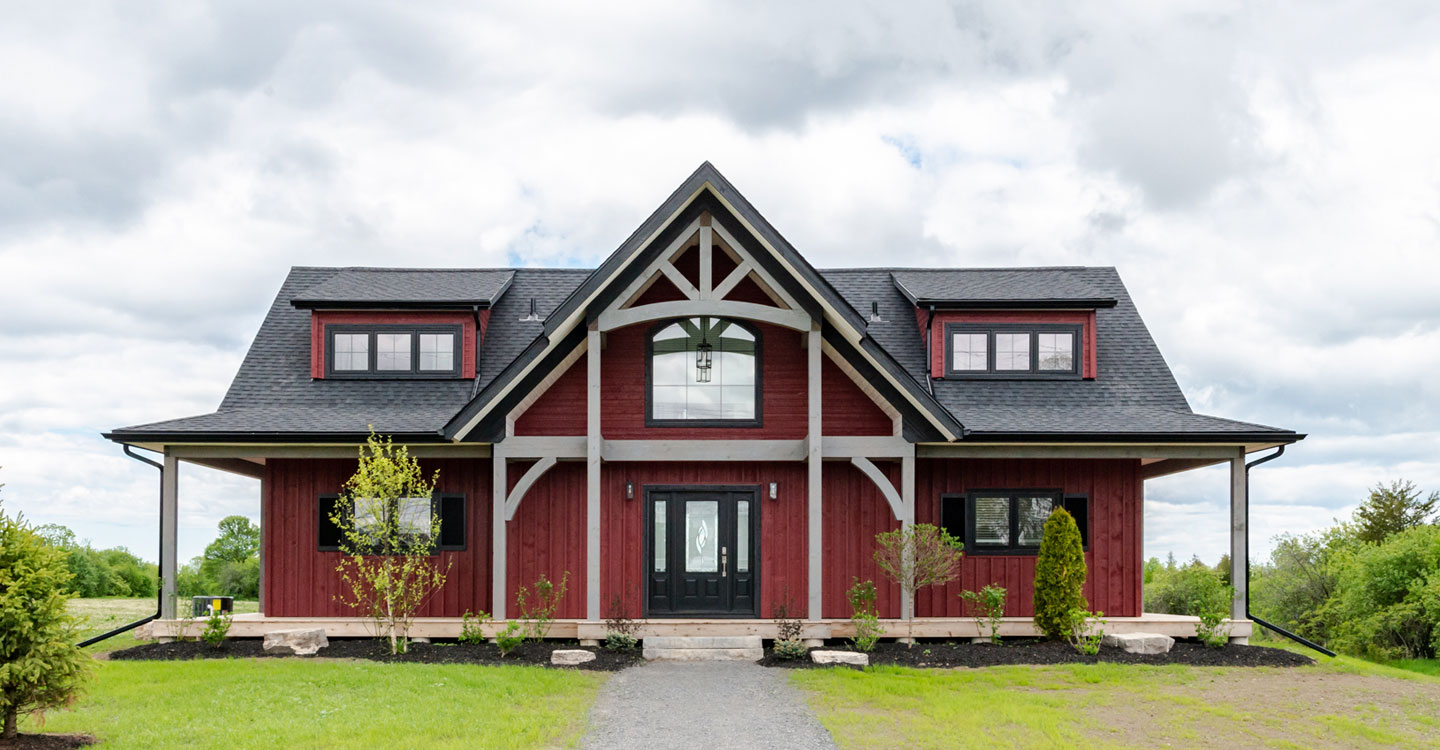 There is significant overlap between these two styles. For example, post & beam models can also be built with solid timbers, which leads to confusion between the two terms. In general, the two use the same method of construction, they produce the same visual result and post & beam homes can be seen as the modern, economical adaptation of timber frame design. In the image above, you can see an example of a hybrid. The interior of this home uses post & beam glu-lams, but the front entrance features large, decorative, solid wood timbers. 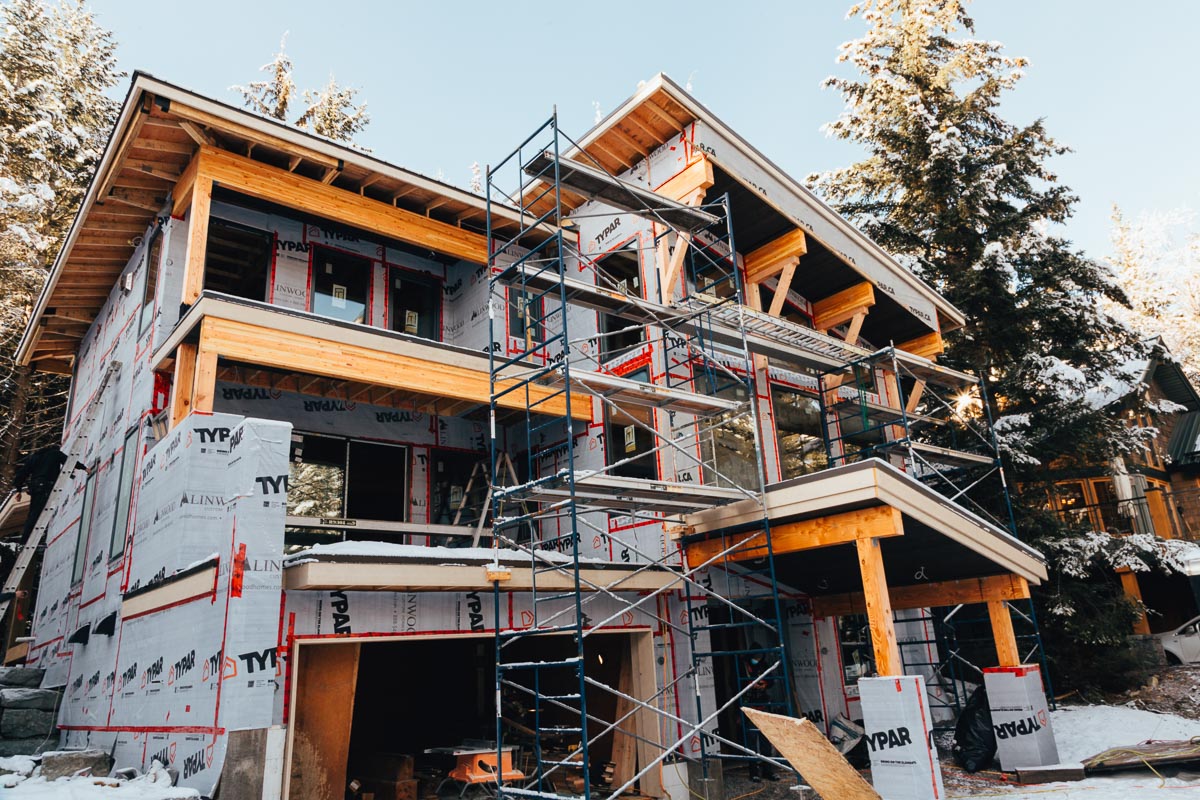 At Linwood, we build post & beam homes more frequently than timber frames but clients can build custom timber frames as well. These are most often special projects which are custom quoted separately. Both styles are beautiful and ultimately very functional.

All of our post & beam and timber frame homes are constructed in our manufacturing facility in Delta, BC. We only use the highest quality Canadian lumber which is cut and assembled indoors in a safe, climate-controlled environment. If you are interested in learning more about our designs, visit our design library, and if you are ready to start building your dream home, click the link to contact us.

Start Your Project With Linwood Homes

If you are interested in designing your dream home, we are just a phone call away. Connect with our team in a free consultation to discuss your project needs and goals. We are excited to work with you and look forward to hearing from you soon. Contact us or call 1-888-546-9663 to get started. You can also join our community on social media, follow Linwood Homes on Facebook and Instagram to see project updates, Q&A sessions and more.

Was this article helpful?

Linwood Homes
One of the best parts about being a custom home provider...
Read More

Linwood Homes
Watch the VideoDale and her husband Eric had always been...
Read More

Linwood Homes
We have added some incredible new home designs to our...
Read More

What is the Difference Between Post & Beam and Timber Frame Homes?